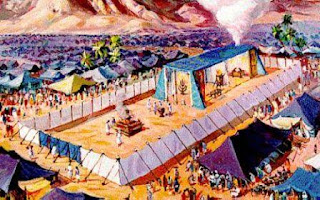 Last Sunday, I preached at Mitchley Hill Evangelical Church in Surrey on John 1:14. The ministry was received enthusiastically and the church is featuring the notes on its website. In view of the fact that my approach to the text was unusual, I thought readers of my blog might appreciate seeing the ouitline. I plan to write more fully on the subject as soon as I find the time but for your meditation and edification, here is my outline. You can listen to the sermon on the church's website.

“The only building ever constructed upon this earth which was perfect from its very beginning and outset in every detail, and never again needed attention, alteration, was the tabernacle in the wilderness … Every single detail was designed by Almighty God, every part had a prophetic, redemptive and typical significance.” (M. R. DeHaan, quoted by Philip Graham Ryken in his commentary on Exodus, Crossway Books, page 813).

The worship of the Hebrew patriarchs, Abraham, Isaac and Jacob consisted of pitching their tents, building their altars and calling on the name of the Lord (Genesis 12:8; 26:25; 33:19,20).

When God redeemed Israel from Egypt, he pitched his tent (Tabernacle) among them, they built an altar and called on his name. When Israel came into the land God had promised them and began to live in permanent dwellings, God also began to live in a house of stone, the Temple.

Detailed instructions for the construction of the tabernacle in the wilderness were given to Moses on Mount Sinai, and an elaborate system of rituals and sacrifices was also ordained with a professional priesthood to attend to the worship of God.

The Tabernacle was the house of God. It was the meeting place of heaven and earth. In Exodus 40, as the Tabernacle was raised and dedicated, the glory of God descended and entered the Holy of Holies.

The Tabernacle proper (the tent) was situated in a courtyard. It was 30 cubits long (45 feet), ten cubits wide (15 feet) and ten cubits high. Inside, the tent was divided into two sections: the Holy Place, where the priests went daily to perform their duties, and the Most Holy Place (Holy of Holies). The two sections were divided by a thick curtain and the High Priest alone was allowed to go beyond that curtain or veil once a year on the Day of Atonement (Leviticus 16).

Seven pieces of furniture paved the way from the gate of the outer court of the Tabernacle to the Holy of Holies: the bronze altar of sacrifice; the bronze bath or laver; the golden table containing the “bread of the Presence”; the seven-branched lampstand, or Menorah; the gold altar of incense; the Ark of the Covenant and the Mercy Seat of God.

This furniture was laid out in the form of a cross. The twelve tribes camped round the Tabernacle in the shape of a cross. When the blood of the Passover lamb was daubed on the doorposts and lintels of the Israelite homes in Egypt, the one who painted the blood did so by making the sign of the cross. The cross has always been way to God and the means of rede3mption for God’s people.

Exodus 40:33-35 says: “And [Moses] reared up the court round about the tabernacle and … finished the work. Then a cloud covered the tent of the congregation, and the glory of the LORD filled the tabernacle.”

In John 1:14, John tells us, “The Word was made flesh, and dwelt [literally, “tabernacled”] among us, (and we beheld his glory, the glory as of the only begotten of the Father,) full of grace and truth.”

John chose his words carefully. “The Word became flesh and tabernacled” among his people. John intended to show us in his Gospel that the tabernacle was a foreshadowing of Jesus, the Word of God, and that Jesus is in fact the true tabernacle in whom the glory of God shines. In his Gospel, John reveals the glory of the Word by showing how every piece of furniture in the Tabernacle corresponded to a glorious quality in Jesus.

First of all, John does something none of the other Gospel writers does. He presents to us Jesus as “the Lamb of God who takes away the sin of the world”. By so doing, he takes us inside the gate of the true Tabernacle to:

The lambs that atoned for sins were sacrificed on the bronze altar just inside the gate of the Tabernacle courtyard. By identifying Jesus as the sacrificial “Lamb of God”, John is taking us to that altar.

The second piece of furniture in the Tabernacle was the bronze laver, at which the priests bathed themselves daily before commencing their duties. The recurring motif in John chapters 2 to 5 is water. Water that is better because it is turned into wine; water that reaches the parts the water of the Tabernacle could ever do.

2:1-11: “…When the master of the feast tasted the water that had now become wine … This, the first of his signs, Jesus did at Cana in Galilee, and manifested his glory.”

3:1-8: “Truly, truly I say to you, unless one is born of water and of the Spirit, he cannot enter the kingdom of God.”

5:1-9: “Now there is in Jerusalem by the Sheep Gate a pool, in Aramaic called Bethesda … One man was there who had been an invalid for thirty eight years.”

The theme of John 6 is the feeding of the multitude and Jesus’ declaration that he is the “bread of life”.

6:35: “I am the bread of life; whoever comes to me shall not hunger, and whoever believes in me shall never thirst.”

In the next chapter, John concludes his theme of Jesus the True Bread with what might seem to us to be a throwaway line but which would have had great significance to his first-century Jewish readers. Jesus the “bread of life” was born in Bethlehem which, in Hebrew, means “House of Bread”.

7:35: “When they heard these words, some of the people said, ‘This really is the Prophet’. Others said, ‘This is the Messiah.’ But some said, ‘Is the Messiah to come from Galilee? Has not the Scripture said that the Messiah … comes from Bethlehem?’”

From chapter 9 of John’s Gospel to the end of chapter 16, the dominant motif is light, a motif that corresponds to the Menorah in the ancient Tabernacle. Light is a symbol of truth and chapters 13-16 comprise the longest recorded discourse in the Gospels by Jesus, as he teaches his disciples.

9:39: “For judgment I came into this world, that those who do not see may see, and those who see may become blind.”

11:43,44: “When he had said these things, he cried out with a loud voice, ‘Lazarus, come out.’ The man who had died came out, his hands and feet bound with linen strips, and his face wrapped with a cloth. Jesus said to them, ‘Unbind him, and let him go’.”

12:44: “I have come into the world as light, so that whoever believes in me may not remain in darkness.”

16:12-14: “I still have many things to say to you, but you cannot bear them now. When the Spirit of truth comes, he will guide you into all the truth, for he will not speak on his own authority, but whatever he hears he will speak, and he will declare to you the things that are to come. He will glorify me, for he will take what is mine and declare it to you.”

A beautiful little gold altar stood before the curtain which sealed off the Holy of Holies from the Holy Place. Here, the High Priest prayed for the people wearing the breastplate with twelve precious stones attached to it so that he carried the people of Israel on his heart (Exodus 28:29). In his prayer in John 17, Jesus carried his people through all ages on his heart before God.

17:20: “I do not ask for these only, but also for those who will believe in me through their word.”

21:17: “Do not cling to me, for I have not yet ascended to the Father; but go to my brothers and say to them, ‘I am ascending to my Father and your Father, to my God and your God.”

According to the Hebrews 9:11,12, “Messiah appeared as a high priest of the good things that have come, then through the greater and more perfect tent (not made with hands, that is, not of this creation) he entered once for all into the holy places, not by means of the blood of goats and calves but by means of his own blood, thus securing an eternal redemption.”

Jesus’ revelation to Mary that he would ascend to God is John’s way of telling us what the writer to the Hebrews tells us. Jesus would ascend to heaven, where he would pray for his people and enable us to have a more intimate relationship with him than when he was on earth in the flesh. For that reason, Mary must not cling to the old fleshly relationship.

In his Gospel, John reveals the glory of Jesus as the fulfilment of all that the furniture of the Tabernacle symbolised. As the Lamb of God, Jesus is our atonement and the source of forgiveness; as the fulfilment of the laver, he provides inner cleansing and inner refreshment and satisfaction; as the “bread from heaven”, he feeds and sustains us in himself; as the “light of the world” he is the perfect light, by whom we find the father (14:6); as our high priest, he bears us on his heart and constantly intercedes for us in heaven; after his resurrection he physically ascended to the Holy of Holies in heaven where, as it were, he sprinkled his atoning blood. Whatever we need, Jesus is the answer. In him, heaven and earth meet. He is our perfect Tabernacle, whose glory we see in the pages of the Fourth Gospel.
Posted by Mike Moore at 14:01