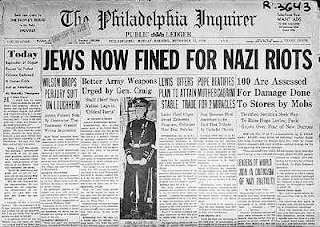 Hindsight, as they say, is a wonderful thing.

Tonight we remember Kristallnacht, the night in 1938 when Jewish shops and synagogues throughout Germany were vandalised, looted and destroyed. As far as the safety and security of the Jews in Europe was concerned, Kristallnacht was the writing on the wall. It was the harbinger of a terror to come when millions of Jews, not just their properties and possessions, would perish.

The condemnation of the killing of Jews in the past is easy. Seventy years ago the Jews occupied their rightful place in society as the underdogs and we all feel sorry for the underdog. Today, Israel is strong both economically, industrially and militarily. She has risen above the underdog status that Jews should rightfully occupy.

So, seventy-three years on, we lament the night of broken glass while turning a blind eye to the nights, days, weeks and years of broken glass in Israel and blame the Jews for their current woes and, worse, accuse them of perpetrating atrocities on their neighbours in the Middle East.

Tonight, we hang our heads and wipe our moist eyes and ask rhetorically how a catastrophe on the scale of the Holocaust could possibly have befallen the Jews of Europe while, at the same time, we ignore the dark portentious storm clouds of another Holocaust hovering over the Jews of Israel.

Consider this. On 18 October, 1,027 well-fed, well-cared for Palestinian terrorists walked free from Israeli prisons. In exchange, Hamas released a gaunt, pale Gilad Shalit. Israeli officials said he showed signs of malnutrition, Vitamin D deficiency caused by lack of exposure to sunlight, and was still suffering the effects of the wounds he sustained when he was kidnapped more than five years ago.

Hamas has since vowed to abduct more Israeli soldiers. Prominent Saudi Muslim cleric Awad el-Qarni and Saudi Prince Khaled bin Talal have offered generous rewards to anyone who captures an Israeli soldier with a view of his being exchanged for Palestinian prisoners.

Two of the released Palestinian terrorists – Ahlam Tamimi, who masterminded an attack on a Jerusalem pizzeria, and Muhammad Abu Ataya – vowed to continue the fight against Israel. Speaking on Palestinian television, Tamimi expressed satisfaction about the number she killed: ‘You know how many casualties there were? … I would do it again today, and in the same manner.’

A public opinion poll in Egypt has revealed that most Egyptians want to annul the nation’s peace treaty with Israel. Fifty-four percent of Egyptians will support a candidate who advocates annulling the Camp David Accords.

Since the grossly asymmetrical exchange of prisoners, Turkey – whose belligerence toward Israel has been highly publicised – suffered a massive earthquake. Gaza, which Turkey supported by sending flotillas crewed by murderous anti-Israel activists, supplied no aid to Turkey’s earthquake victims. Neither did the Palestinian Authority. Muslim Malaysia and oil-rich Saudi Arabia sent anything to Turkey but their condolences.

But the allegedly Nazi-governed, apartheid Zionist state that massacres Palestinians with monotonous regularity was one of the first countries to supply aid to Turkey’s victims. Meanwhile, a two-ship flotilla has set sail from Turkey to Gaza to break the Israeli blockade.

Dozens of Grad missiles have been fired from Gaza into south-central Israel, destroying buildings and killing an Israeli civilian, while a delegation from Egypt’s Muslim Brotherhood visited Gaza to meet Hamas Prime Minister Ismail Haniyeh, signalling a major shift in Cairo’s posture toward the Palestinian Islamists.

And when Israel responds to these outrageous acts of war against its citizens, it is condemned by the very media moguls who shed crocodile tears for the six million victims of the Nazis.

As Israel releases over 1,000 Palestinian Nazis (no, that’s not an hyperbolic overstatement made for effect, Mein Kampf is a best seller in Arab countries), armchair experts in the West accuse the Jewish state of perpetrating a holocaust against the Palestinians.

Even as some of these well-fed, well-cared-for former prisoners declare their intention to continue to wage war against the Jews, their supporters denounce Israel as a Nazi state.

As western, left-wing liberals brand Israel a racist state, Islamic clerics teach Moslem children that Jews are pigs and apes, just as the Nazis taught that Jews were sub-human vermin, fit only to be exterminated.

Even as the Palestinian President declares that his vision for a Judenrein Palestinian state, his Arab neighbours and western liberals denounce Israel as an apartheid state.

Dismissing the hail of missiles from Gaza as little more than a nuisance, the West condemns Israel for defending its citizens by killing the perpetrators.

Bob Dylan trenchantly observed almost thirty years ago that Israel is the viewed as the neighbourhood bully of the Middle East:

The neighbourhood bully, he just lives to survive.
He's criticized and condemned for being alive.
He's not supposed to fight back, he's supposed to have thick skin,
He's supposed to lay down and die when his door is kicked in…

So what's new? The Nazis blamed the Jews for the Kristallnacht riots and fined them for the destruction of their own shops and synagogues.

Have the lunatics taken over the mad-house, or is are we witnessing one of the most compelling evidences for the Christian doctrine of Total Depravity?
Posted by Mike Moore at 07:24 No comments: 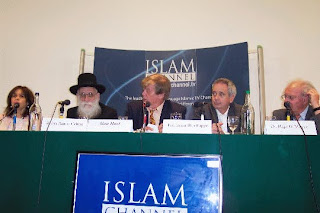 The Rosh Pina Project has revealed that the producers of the anti-Israel film With God on our Side used a known false quote from David Ben Gurion to bolster their claim that the the founders of the state of Israel intended to ethnically cleanse the Arabs from the land. The quote came from Ilan Pappe's The Ethnic Cleansing of Palestine, a book I reviewed for Evangelicals Now in June 2009. Although widely quoted by anti-Israel writers, Pappe (pictured second from right)is 'fundamentally unsound sir,' as Jeeves would say.

My review is on the EN website but for your convenience, here it is.

In Israel they say ‘it’s easier to throw mud than to clean it up’ and it is far beyond the capability of a brief review to clear up the mess created by Ilan Pappe’s barrage in The Ethnic Cleansing of Palestine. This review must content itself with supplying guidelines to enable potential readers to judge the reliability or otherwise of Pappe’s indictment of Israel.

Pappe is currently a lecturer in the Department of History at Exeter University and a co-director of the Exeter Centre for Ethno-Political Studies. He is one of a small but influential group of revisionist historians who since the early 90s have challenged the conventional account of the birth of the modern state of Israel, portraying the Zionists as colonialist aggressors and the Palestinian Arabs as their victims.

Pappe, however, is so extreme that some of his fellow revisionists have condemned both his methods of doing history and his conclusions. Pappe’s anti-Israel bias is so extreme that he recently gave an in-depth interview to the German anti-Semitic neo-Nazi paper National Zeitung, in which he repeated his charges against Israel.

The title of the book says it all. According to Pappe, contrary to the received wisdom, Hagana’s ‘Plan Dalet’ (Plan D) was not a strategy to defend Israel from Arab aggressors but a plot to cleanse the newly founded state of Israel of its Palestinian population. One would expect such a radical theory from a senior lecturer in history to be replete with extensive quotations from primary documentary sources, but, as Pappe makes clear in his Preface, he distrusts written Israeli military reports and prefers, instead, Arab sources and oral history (p.xv).

According to Pappe, the execution of Plan Dalet led to the forcible expulsion of more than half the Palestinian population of Israel and the total destruction of half its villages and towns. Pappe himself expresses surprise that a crime against humanity of such a magnitude should have gone unnoticed and unreported for 60 years when it ‘was perpetrated in modern times and at a juncture in history that called for foreign reporters and UN observers to be present’ (p.9).

Most anti-Israel writers at least claim to base their findings on documentary evidence, but Pappe is a self-confessed postmodern relativist for whom historical research is ‘a backward-looking projection of political attitudes and agendas regardless of actual facts’.

Chapter 6 features what is arguably the clearest example of his disdain for historical fact. Here he repeats an allegation of the deliberate massacre of 200 Palestinians in the village of Tantura by the Jewish Alexandroni Brigade. Pappe’s story relies heavily on a discredited doctoral dissertation by Teddy Katz, a graduate of Haifa University, who was found to have ‘gravely and severely’ falsified his evidence.

Nevertheless, in the Spring 2001 issue of the Journal of Palestine Studies, Ilan Pappe defended Katz, insisting that his conclusions were correct, even if his facts were not, since historical research need not be based on facts! ‘The Massacre at Tantura’ takes up five pages of chapter 6 and features about a dozen quotes and citations, only three of which are sourced, one of them being to a previous Pappe publication.

Under the unimaginable stresses and pressures of a struggle to survive, even the most civilised armies are capable of barbaric acts, but Ilan Pappe wishes us to believe that barbarism was the stock in trade of David Ben-Gurion and his cabinet.

If you have half a mind to believe that in the space of six months the fledgling state of Israel was able to wipe out over half its Palestinian population under the noses of international reporters and UN observers and leave no trace, that’s all you’ll need.

Calvin Smith has also put in his own two pennies' worth, which is worth reading.

You can see also Calvin debating Stephen Sizer on the subject 'Has the Church replaced Israel?' this Wednesday at 9.00pm on Revelation TV.
Posted by Mike Moore at 13:29 No comments: