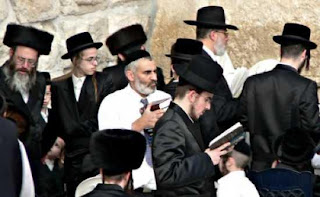 A new study shows that 80% of Israeli Jews believe in God. The study by the Gutman Center of the Israel Democracy Institute, conducted on behalf of the Avi-Chai fund, polled thousands of Israelis in the past several years, and discovered that the number of Israeli Jews who believe in God and practice a religious lifestyle is growing.

Studies during the 1990s showed a continuous decline in the level of belief among Jews in Israel, the latest study reveals that 77% of Israeli Jews believe in a ‘divine power’ that guides the world, and that 72% believe that prayer has the power to improve their lives. Further, 67% of Israelis believe the Jews are the chosen people, and 65% believe that the Torah and its commandments are of Divine origin. In addition, 34% believe that Jews who do not observe the Torah are endangering their fellow Jews and Israelis.

An increasing number of young Israelis are coming to faith in Jesus and that thousands of Israelis are using the World Wide Web to find out about Jesus.

Israelis spend, on average, twice as much time on the Internet as Americans, and a massive 94% of Israeli Internet users are active on social networks and spend over 11 hours each month on Facebook, more than double the 5.7 hours spent by the average person worldwide.

In the last two years, a number of Israeli Messianic Jews have begun using the Internet and social networking sites to reach their fellow Jews with the message of Jesus. The website iGod.co.il is aimed at secular Israelis who are looking for something deeper in life, xRabbi.co.il attracts those from an Orthodox background, while another site allows visitors to either download or order a print copy of the New Testament free of charge.

Most Israelis know nothing of the prophecies in the Hebrew Scriptures that point to Jesus but adverts on Facebook, Google and other high-traffic websites are attracting thousands of visitors to evangelistic Hebrew-language websites such as TheOne.co.il which presents a childishly simple explanation of God’s plan of redemption.

The statistics are impressive. Every month, Israelis google the name Yeshua (Jesus) more than 25,000 times, while Brit Hadasha (New Testament) is googled over 5,000 times. On average, an Israeli downloads a New Testament in MP3 format every five hours, while a free copy of the New Testament is ordered every 17 hours.

CWI's Israel website carries a wide range of evangelistic and teaching material at
Posted by Mike Moore at 08:53 No comments: 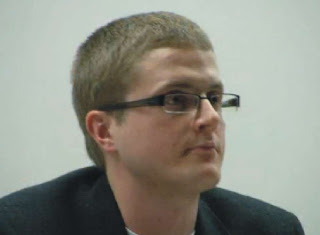 The Zionist Federation has written to Amnesty International, urging the organisation to ‘reconsider the appropriateness of promoting Ben White [above],’ whose book launch it is due to host tonight, the eve of Holocaust Memorial Day (get it?).

White's book, Palestinians in Israel: Segregation, Discrimination and Democracy, carries a Foreword by the extremist Israeli-Arab Knesset Member Haneen Zoabi who called for a third Intifada against Israel in 2010.

White’s criticisms of Israel, says the ZF, go well beyond the bounds of acceptable conduct. The letter points out that in 2002, White wrote ‘I have just provided a by no means comprehensive list of reasons why I can understand very well that some people are unpleasant towards Jews. I do not agree with them, but I can understand.’ The article is still available on the anti-Zionist Counterpunch website.

In 2007, White wrote in Palestine News, the magazine of the Palestine Solidarity Campaign: ‘Pity the Palestinians, who, in the name of a “social-democratic experiment,” had to endure massacres, death-marches, and ethnic cleansing.’

No Palestinians have been forced to endure death marches or ethnic cleansing. There has been one alleged massacre of Palestinians, which is disputed, as opposed to several documented Arab massacres of Jews.

White’s previous book, Israeli Apartheid: A Beginner’s Guide, says the ZF letter is ‘full of untruths and inaccuracies. Among the worst of these was his misquoting of Ben Gurion, Israel’s first Prime Minister, as saying “We must expel Arabs and take their places” Ben Gurion had actually said the opposite: “We do not wish and do not need to expel Arabs and take their places.’

The letter claims that White is motivated ‘not by a true concern for the Palestinians but rather an irrational obsession with and hatred of Israel. If he were truly concerned with the rights of underprivileged people, why, in all the time that he spent living in Brazil, have we been unable to find any articles by him on the terrible discrimination and persecution suffered by those in the Favelas and by the native peoples in the Amazon region?’

White has also defended Sheikh Raed Salah, a racist and anti-Semite who claims that the Jews bake the blood of children into their holy bread, that 4,000 Jews were absent from work at the World Trade Centre on 9/11, taunted a Jewish teacher with a Swastika and wrote a poem referring to Jews as ‘monkeys and losers’ and being ‘the bacteria of all times.’

The ZF has urged Amnesty to reconsider their support for tonight’s event or to provide a genuine debate to take place with a speaker who holds a different view to that of White. It looks, however, as though the ZF’s plea has fallen on deaf ears.

Ben White is to be a speaker at the second ‘Christ at the Checkpoint’ conference in March, cynically timed to coincide with the festival of Purim when Jews celebrate their divine deliverance at the time of Esther. Though the event is billed as a ‘Christian Conference of Hope and Reconciliation’, one wonders if, with White as a speaker, ‘Christ at the Checkpoint’ is just another exercise in delegitimizing Israel and undermining Christian support for the only democracy in the Middle East.

Having said that, White may well put his audience to sleep. See him in action here.

And just in case you are planning to go to the launch of Palestinians in Israel: Segregation, Discrimination and Democracy, 'Amnesty International UK reserves the right to refuse entry to any person for any reason deemed appropriate by us, including (but not exclusively): capacity limitations, intoxication or any conduct that we consider would be disruptive or offensive...' That means you won't be able to ask any questions White can't answer.
Posted by Mike Moore at 09:43 No comments:

Egypt's threat to Jews and Christians 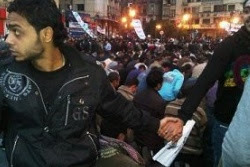 Contrary to the grand statements by Egyptian, Israeli and Western diplomats that the Camp David Accords were in no danger, Egypt’s new dominant political force, the Muslim Brotherhood, vowed this week to increase Cairo’s hostility toward Israel and to possibly cancel the Camp David Accords.

In an interview with the Arabic newspaper Al-Hayat published on Sunday, Muslim Brotherhood deputy leader Dr. Rashad Bayoumi insisted that his group will never recognize Israel’s right to exist ‘under any circumstance.’

When he was reminded that the Camp David Accords obligate Egypt’s government to recognize and have peaceful relations with Israel, Bayoumi said he didn’t care: ‘This is not an option, whatever the circumstances, we do not recognize Israel at all …The Brotherhood respects international conventions, but we will take legal action against the peace treaty with the Zionist entity.’

Bayoumi’s remarks followed the first two rounds of voting in Egypt’s first parliamentary election since the fall of former dictator Hosni Mubarak. The Muslim Brotherhood is on track to control 40% of the parliament by the time the third round of voting is completed this week. Allied Islamist party al-Nour will come in second place by winning around 30 percent of the vote.

Western leaders have tried to downplay the fact that Egypt’s next government will be controlled by Islamist parties with ties to Hamas and other terror groups. Last year, US President Barak Obama, Secretary of State Hillary Clinton and other top American officials dismissed the Muslim Brotherhood a ‘fringe’ movement within Egypt (one Senator even said the Muslim Brotherhood was a ‘secular’ organisation), and was unlikely to win outright control in free elections. Obama insisted in early 2011 that the Brotherhood didn’t have majority support in Egypt.

When it became increasingly clear over the summer that the Muslim Brotherhood was emerging as Egypt’s new dominant force, Obama’s reaction was to ‘engage’ the party that had once been condemned by Washington as a terrorist organization.

This week, the Brotherhood’s second in command told Arab media that, once in power, his group will never recognize Israel and will work to undo the Camp David Accords, a policy that has the potential to unhinge what’s left of regional stability.

Another claim making the media rounds is that Egypt’s revolution and even the rise of the Islamists will be good for the country’s 8-10 million Coptic Christians.

Bolstering this fallacy was a photo (see above)showing a handful of Coptic Christians forming a protective ring around praying Muslims during the first anti-government demonstrations early last year. During the past week, the photo was placed highly on various polls for the best news photos of 2011, perpetuating the myth that Egypt’s revolution was a united Christian-Muslim effort or was not about religion at all.

Since the photo was taken, however, the rising Islamic tide in Egypt has claimed many Christian lives, and Coptic leaders have complained that the Muslim Brotherhood and other Islamists are leaving them out of crucial decision-making processes that will determine the future of Egypt.

In a recent act of Muslim violence against the Copts, the newspaper Al-Masry Al-Youm reported that a number of Coptic homes near the Egyptian city of Asyut were burned by Muslim mobs angered by a local Christian boy who shared a critical drawing of the Prophet Mohammed on his Facebook account.

Police stopped the mob from completely destroying the boy’s house, so they moved to the next village and attacked the homes of two Christian families that had nothing to do with the drawing or its dissemination over the Internet.

In October, an Egyptian court sentenced a young Christian man to three years in prison for posting opinions deemed offensive to Islam and Mohammed on his Facebook account.

It looks as though Israel will soon have a second Islamic Republic to deal with, this time on its very doorstep. And that Republic will be heavily armed with the best weapons America can sell.
Posted by Mike Moore at 08:27 No comments: