Whatever happened to Daniel 2:44? As South East England is at a virtual standstill with snow, I find my mind straying back to last week when I was in Roca Baton in Florida to present a paper the the North America conference of the Lausanne Consultation on Jewish Evangelism on Apologetics. My paper dealt with the use of Daniel 2:44 in sharing the gospel with Jewish people. This is the paper I presented. On Good Friday, I'm conducting a Passover Demonstration at Carnhell Green Fellowship in Carnhell Green, near Camborne in Cornwall.

During the evening I'll be explaining the significance of the Passover for Christians, what the symbolic foods represent, and how Jesus is pictured in the Passover celebration and story. And there will be a Passover meal.

The cost is £10 per person and half price for children aged 16 years and under. There will also be a crèche which will free up parents to enjoy their evening.

Peter and Hazelmary are a very brave couple who have suffered much for the cause of Christ and Truth and I would encourage you, if you live near Carnhell Green, to support the event. 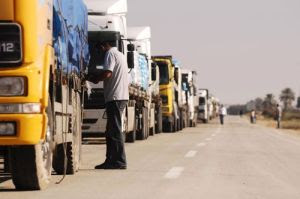 Since Israel’s withdrawal from Gaza in 2005, the Jewish state has been working with the Palestinian Authority to ensure that regular food supplies enter Gaza. But last Monday Hamas seized control of Gaza’s border crossings from the PA and promptly closed the gates, leaving dozens of heavy trucks loaded with perishable items and humanitarian aid sitting idly on the border, unable to enter the coastal enclave.
Israeli General Eitan Dangot, the officer in charge of coordinating aid transfers, stressed that Israel continues to facilitate the entry of goods to Gaza, and will gladly resume that practice once Hamas opens the border. He further noted that Hamas is inflicting great harm on its own people in a misguided attempt to score PR points with the international community.
So where are all those blockaders, boycotters, disinvesters and sanction advocates when the poor of Gaza really need them?
Posted by Mike Moore at 14:26 No comments:

Ed Miliband speaks out on Israel

What is the world coming to! A Jewish left-wing, liberal political figure stands up for Israel!

During a public meeting of around 300 people last night,.Labour Party leader Ed Miliband pledged his support for Israel and declared total opposition to those who support boycotts against the Jewish State.
In an event organised by the UK Board of Jewish Deputies, Miliband touched on his own personal connections to Israel, recalling that his grandmother had settled in Tel Aviv after the Second World War: 'I have huge respect, admiration and indeed a debt…to Israel for the sanctuary it gave my grandmother – Israel gave her comfort.'

Asked by a member of the audience whether he is a Zionist, the Labour leader replied, 'Yes, I consider myself a supporter of Israel.'
Miliband then said that although he does 'not always agree' with Israel’s government and that people should 'understand the anger and dismay about settlements,' he is 'intolerant of those who question Israel’s right to exist. We should have no tolerance for those who go down that road.'

Expanding on this theme, the Leader of the Opposition continued, 'I take anti-Semitism very seriously. Any kind of delegitimisation of Israel is something we should call out for what it is and not tolerate it.'

As a result, Miliband firmly stated, 'I think the boycotts of Israel are totally wrong. We should have no tolerance for boycotts. I would say that to any trade union leaders.'
He affirmed his commitment to a two-state solution on several occasions and talked about the need to 'encourage moderate' Palestinians, hoping that Britain could be an 'honest broker' in the process. Addressing Iran’s nuclear development, Miliband said that although he supported the dual approach of diplomacy and sanctions, we should not take any option off the table.'
Posted by Mike Moore at 09:53 1 comment: