Gamaliel among the politically minded

Who would have thought that one of the foremost left-wing political blogs would invite a Messianic Jew to post a guest blog about an incident recorded in the New Testament? But Harry's Place invited Joseph Weissman to do just that.

As was to be expected, the blog attracted a great deal of attention - negative and positive - and I submitted the folowing comment. Go to the blog and have your say:

I once attended a lecture by Hyam Maccoby at which he expressed his scholarly opinion that the Gamliel account in chapter 5 of the New Testament book of Acts was one of the few authentically trustworthy passages in the book.

However, Maccoby didn’t comment on the wisdom of Gamliel’s judgement.

What are the merits of Gamliel’s case? The first thing to say is that Gamliel was either right or he was wrong. But on what basis can we say Gamliel was wrong? A number of movements such as Chassidic Judaism, Islam, Buddhism, Scientology, Secular Humanism and the Latter Day Saints have failed to ‘come to nothing’ but they all teach different doctrines, and only a purblind post-modernist would suggest that they are all teaching ‘Truth’. Indeed, while Gamliel spoke, there were a number of sects within Judaism, including the Sadducees, the Essenes and the Zealots. Even within Gamliel’s Phariseeism there were the hard-line Shamaites and the more moderate Hillelites. Were they all ‘of God’? Certainly those within the various groups did not think so.

Nevertheless, the Sanhedrin appeared to think there was merit in Gamliel’s counsel; therefore they followed it.

Let’s be clear about this; within months of the death and reported resurrection of Jesus, the first-century Jews who followed him as Messiah was so great they were the largest sect within Judaism (Josephus says there were just 6,000 Pharisees) and the leaders of the influential Pharisaic and Sadducean parties felt threatened.

The followers of Jesus were not simply another sect of Judaism, they believed the Messiah had come and was present with them. Gamliel names two other messianic leaders, Theudas and Judas (Josephus also mentions them), both of whom came to a sticky end (we might also say the same about Shimon bar Kosiba and Rabbi Akiva).

In every generation since, there have been messianic pretenders who started movements which, in accordance with Gamliel’s wisdom, came to nothing. Even Chabad must inevitably collapse under the weight of its own pretensions. How much longer can Chabadniks claim their Rebbe is going to rise from the dead? Within the first three months of the first century Jesus movement, more than 5,000 Jews in Jerusalem believed Jesus had risen from the dead. The only way you can get a story about a resurrected Saviour to fly, it seems, is if it is true.

Was Gamliel right in his judgement? You betcha.
Posted by Mike Moore at 09:28 No comments: 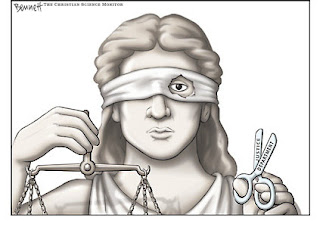 British justice was once the shining symbol of democracy and the justice system. Not any more, it would seem!

Good News from Israel! Posted the following on Sunday 4 July.

Today, thanks to Justice George Bathurst-Norman, British justice is linked to the political bias of a presiding judge.

In at least one recent case, British justice has proved to be blind to truth, blind to facts and evidence, and its scales have tilted in favour of criminals and vandals who act according to a retired judge's political preferences.

In the court of George Bathurst-Norman, breaking the law, it seems, is permitted if the purpose is to cause damage to, or to slander, the State of Israel.

Seven activists who admitted causing £180 worth of damage to company property walked free. They had been accused of deliberately damaging the property of EDO MBM, a company that manufactures and exports military equipment from Britain.

Their defence was that they wanted to slow down and impede the delivery of spare parts to Israel because of its policy in Gaza.

Hove Crown Court in Brighton heard statements video-taped prior to the incident in which the perpetrators admitted that they intended to cause as much damage as they could to the property of EDO MBM. They also saw evidence of the damage. Yet Justice Bathurst-Norman found them NOT GUILTY!

In his summation, Judge Bathurst-Norman said, "You may well think that hell on earth would be an understatement of what the Gazans suffered".

This was the direction that the judge gave to the jury. Irrespective of the true situation in Gaza, this judge directed his jury according to his own political whim, which mirrored that of the activists and anarchists standing in the dock in his courtroom.

This judge effectively directed a jury based on his own political bias with the result that the accused were all acquitted of their crimes.

Judge Bathurst-Norman, who was born in the Arab town of Jaffa in Israel, had been dragged out of retirement to hear the case. That, in itself, is strange.

In a previous case he given a man a three-year jail sentence for lopping off the head of a statue of Margaret Thatcher. This was a statue, not Mrs Thatcher herself, or an expensive work of art.
Yet, damage assessed at almost two hundred thousands pounds Sterling deserved, according to his honour, complete freedom.

In 2001, he gave Abu Bakr Siddiqui a twelve-month suspended sentence for smuggling materials and technology out of Britain to be used for nuclear weapons in Iran and North Korea. A police search of his British home found that millions of dollars of equipment had been smuggled out of British to notorious Pakistani scientist A.Q. Khan. Usually, this charge carries a prolonged prison sentence.

Whichever way you look at it, British justice is now politically biased.
Posted by Mike Moore at 06:19 No comments: