Thick as a brick in the wall 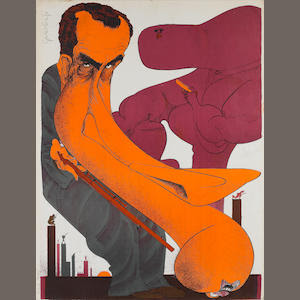 Rupert Murdoch, as we know, has had to once again swallow a large piece of humble following the outcry over Gerald Scarfe's  Holocaust Memorial Day cartoon in the Sunday Times. Scarfe himself, in what I think must be for him an unprecedented step, said he was sorry. But it was a qualified apology. He did not know, he said, that the cartoon was to appear on Holocaust Memorial Day. From this we may assume that on any other day it would have been appropriate to caricature the Israeli Prime Minister as a bloodthirsty, genocidal monster using Palestinian citizens as bricks in the bloody wall of his political career. It is worth remembering that the cartoon as such was not a protest against the wall erected by the Israelis to keep suicide bombers out of Israel. Entitled, 'Israeli Elections... Will Cementing Peace Continue,' it was a claim that the the Israel Prime Minister is not serious about peace and that he is murdering Palestinians in pursuit of political power. In other words: a vote for Netanyahu is vote for fascism. If that really is the case, bring it on. Let's have more of the same, especially on Holocaust Memorial Days.

Why did the Sunday Times publish the cartoon when they did? The way the thinking goes is something like this: We all sympathise with the Jews. They have suffered so much and we sympathise with them to the point that we've now set aside a day each year on which we share in their grief and sorrow. But look at how they behave. The people who have suffered so much are now inflicting pain on their powerless neighbours. Those who endured the Holocaust over a six-year period have been perpetrating a holocaust on the Palestinians for almost 65 years. Those who were oppressed by the Nazis have themselves become Nazis.

If all that is true, Murdoch and Scarfe owe Israel no apology. If the state of Israel is an apartheid, genocidal regime run by Nazis, it deserves no sympathy. The sooner the current regime is replaced the better. And if they can't elect a government that respects basic human rights then the state deserves to be dismantled.

I loved Gerald Scarfe's anti-American, anti-South Africa, anti-Rhodesia cartoons in the sixties and seventies. Some white Americans, white South Africans and white Rhodesians were incandescent with rage over Scarfe's hyper-exaggerated depictions of Richard Nixon's nose (see above) and Ian Smith's glass eye. But whatever one's opinions about US troops in Vietnam and white minority rule in Rhodesia and South Africa back then, American bombs really were  dropping on the villages of South East Asia, and black South Africans and Rhodesians really were suffering under the apartheid regimes in those countries.

And that's the entire point. Though Scarfe's portrait of Binyamin Netanyahu is positively photographic compared to the excoriating caricatures of politicians he produced in the 1960s, the idea that the Prime Minister of Israel is massacring Palestinian civilians for his own political ends (or for any ends for that matter) is a palpable lie. And for Murdoch's newspaper to feature it on Holocaust Memorial Day compounds the injury.

I wonder what Gerald Scarfe's reaction would be if a fellow satirical cartoonist portrayed him at his drawing board, pen dripping with blood surrounded by blood-stained cheques being watched at work by the tear-stained, traumatised eyes of women and children from the bombed Israeli city of Sderot.

Let me say first of all that I have always admired Gerald Scarfe's cartoons. When I was a teenager I wanted to draw like him. He is the Hogarth of the 20th and 21st centuries. Of course, his drawings are often crude and scatalogical but, then, he feels passionately about his themes. And he obviously feels passionately about the plight of the Palestinians. But Scarfe's misplaced rage in the cartoon above bears the clear hallmark of 'zeal without knowledge'.

I know the point he is making: A people who have suffered so much are causing suffering to others. And who could object - if Scarfe was right. But he is wrong. Dead wrong.
The following was put out today by Honest Reporting and it is worth reading Rashim Kassam's response to the drawing.

Today is Holocaust Memorial Day. Traditionally, and in line with common decency, it is a day to remember the atrocities of the Second World War, particularly the six million Jewish people slaughtered at the hands of Hitler.
For some, however, Holocaust Memorial Day is transfiguring into a day that ‘the Jews’ or ‘Israel’ (for they will use these terms interchangeably), are to be attacked or set up, completely leaving behind the idea that the country came into existence in the wake of the greatest single crime in history.
Last week, it was Member of Parliament David Ward MP, the case of whom highlights an ever growing contingent of anti-Israel sentiment within the British government. These are the fools who would have you believe that Israel’s security barrier is 100 percent concrete, 100 feet tall, and built from the blood of Palestinians.
And who could possibly blame them for having this ill-informed idea, when their fellow MPs invite them to one-sided trips to the West Bank while at the same time referring to Hamas and Hezbollah as ‘friends’ (more on this tomorrow).
But more to the point, who can blame them when some of the country’s smartest media outlets present Israel and its leaders in this particular light: the large-nosed Jew, hunched over a wall, building with the blood of Palestinians as they writhe in pain within it.
For this is exactly what the Sunday Times has today done; not simply treading the fine line between criticism and blood libel, but indeed spitting all over it, leaving it for dust, and careering head first into anti-Semitismsville.
“Will cementing peace continue?” reads the caption beneath the image of a Quasimodo-like Netanyahu. As if this half-hearted attempt at a pun would help masquerade the overt racism within the image. No.
In conversation with a friend of mine recently, I was asked, “Do you think in 200 years time, people will have forgotten the Holocaust, or believe that it was a myth?” I naively responded, “No. I believe there are enough good people in the world to ensure that doesn’t happen.” At the time, I would never have thought the editors of the Sunday Times were in amongst those who would seek, in true Der Sturmer fashion, to use Holocaust Memorial Day to publish a blood libel, and knowingly undermine the memory of one of the worst genocides ever.
I guess I was wrong on that count. I sure hope I’m not wrong on the other.
Posted by Mike Moore at 07:40 5 comments: