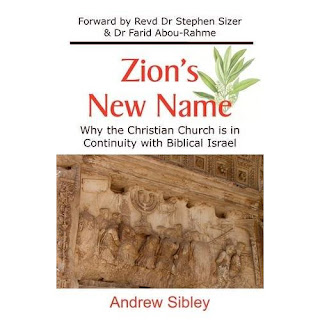 First, the good bits. Sibley is anxious to repudiate a theology that claims the church has replaced Israel and which denies the hope of any future blessing for national Israel. He also reminds us that God loves both Jews and Palestinians, that both Jews and Palestinians are in need of the gospel and that ‘Christians should support the work of evangelism to the Jews’ (p.125). He exposes the errors of some extreme Christian Zionists, notably John Hagee who, in his most recent book, argues that ‘Jesus only intended to be the saviour of the world, and refused to be the Jewish Messiah’ (p.115).

Sibley’s most helpful material is found in chapter 4, ‘Israel in the Old Testament Prophets’, in which he analyzes the promises of the reunification of Israel and Judah found in prophets such as Hosea, Micah, Jeremiah, Ezekiel and Zechariah. He draws a distinction between ‘Israel’ and ‘Judah’, the former being the northern tribes, sometimes referred to in the prophets as ‘Ephraim’. He demonstrates that the northern tribes of Israel, which were conquered and exiled by the Assyrians in the seventh century BC, were not ‘lost’, as is commonly supposed, but remained scattered in the lands to the east of Israel’s homeland. The prophesied reunification of the house of Israel with the house of Judah was to take place under a new David and under a new covenant and therefore the apostles, aware of these promises, concentrated their evangelistic efforts on the scattered Jews and Israelites.

Having said that, the book is marred by numerous errors of spelling, grammar, syntax and punctuation. But those errors are merely irritating compared to Sibley’s factual inaccuracies. Even though he claims he is not opposed to the state of Israel, Sibley appears to be ignorant about some facts about the modern state of Israel. He categorises Israel as ‘expansionist’ (even though the Israeli government forcibly ejected its own people from Gaza over years ago), nationalistic (what nation is not ‘nationalistic’ to some degree?) and an apartheid state (even though Israeli Arabs enjoy the same democratic rights as Israeli Jews). He imagines that there are ‘very severe laws against the evangelism of Jews in Israel’ (p. 15) when, in fact, there are no anti-evangelism laws, severe or otherwise. And in spite of the fact that the numbers of Messianic Jews in Israel is now estimated to be 15,000 and growing, Sibley believes ‘the State of Israel … shows no outward sign of repentance and conversion to Christ’ (p.14).

Last but not least, the book is confusing. Although Sibley’s avowed intent is to reject ‘Replacement Theology’ – the view that the church has ‘superseded or replaced Judaism’ – his main argument is that ‘most prophecies relating to Israel were fulfilled in and through Christ and in his church' and that ‘the church is spiritually, ethnically and legally Israel'. What is this if not Replacement Theology?

Zion’s New Name would have been a far better book if Sibley had concentrated his efforts on developing chapter 4. He has some good things to say but read it with care.
Posted by Mike Moore at 04:37