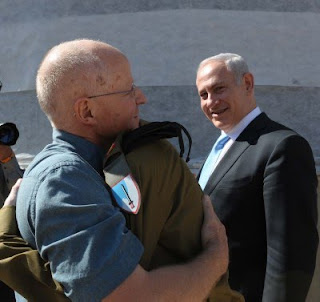 However, he was also glad that Israel was releasing 1,027 Palestinian ‘political prisoners’.

The release of Gilad Shalit is indeed a cause for joy but not unmixed joy. Among the ‘political prisoners’ exchanged for Shalit is Ahlam Tamimi, the unrepentant female terrorist who allegedly smiled when she learned children had been among 15 killed and 130 wounded as a result of her bomb attack on a Jerusalem pizzeria in 2001.

Also on the list is Khalil Muhammad Abu Ulbah, who in 2001 used his Egged passenger bus to kill eight people. So are the terrorists who opened fire on a bus stop in 2005, killing Kinneret Mandel, Matat Rosenfeld-Edler and 14 year-old Oz Ben-Meir. And the terrorist sniper who killed Erez Rund in 2002.

These people are a few of the hundreds of ‘political prisoners’ our evangelical friend if glad to see released.

Michael Ben-Ari lamented the decision and the precedent it sets, telling The Jerusalem Post:

Today every Arab child knows they can murder 20 or 30 Jews and tomorrow they will go free. Israel is sending the message that killing Jews is permissible.

Meir Indor of the Almagor Terror victims’ Organization urged Prime Minister Benjamin Netanyahu not to take part in any celebratory events, since for many Israelis today is a day of happiness for the Shalit family mixed with their own despair.

In a letter to Netanyahu, Indor wrote:

For many Israelis this is a second day of mourning and some see it as a day of submission … There is no victory here.

In Gaza and the Palestinian Authority, meanwhile, celebrations are underway to welcome the killers home.

Our evangelical critic talks of Gilad Shalit as a 'prisoner of war' when, in fact, he was kidnapped during a time of ‘peace’.

In an unusual phrase, he says:

The evangelical writer claims that a spokesman for Hezbollah, no less, consulted him as to what Hezbollah should do. His advice was: ‘Release the Israeli captives. Show them compassion and mercy. Show them you are magnanimous.’

You display mercy to undeserving wretches. The only people showing mercy and magnanimity today are the Israelis.

Take a look at the well fed faces of the released terrorists and compare them with the thin, pale former captive of Hamas.

Ignoring the fact that the evangelical blogger could have told Hezbollah to call a halt to killing Israeli citizens and stop sacrificing their own children as suicide bombers, what does it say about Hezbollah that they ignored his advice? That's right: Hezbollah is uncompassionate, merciless and totally lacking in magnanimity.

For anyone to draw a moral equivalence between the release of Gilad Shalit and the release of over 1,000 unprincipled, cold-blooded, murderous barbarians is chilling. But when an evangelical minister does so, it leaves me with a feeling of dread and revulsion in the pit of my stomach.

I recommend the insightful blog by Calvin Smith, Principal and Tutor of Theology
at King's Evangelical Divinity School
Posted by Mike Moore at 10:41