Syria: 'Stay back or Israel gets it!' 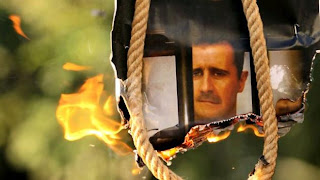 Syrian President Bashar Assad has threatened to carry out an attack on Israel in the event of foreign intervention against his regime, according to the Iranian FARS news agency.

The agency quoted Assad as telling Turkish Foreign Minister Ahmet Davutoglu that he would transfer rockets and missiles to the Golan Heights and fire them at Israel, and that Hezbollah would also attack Israel, if NATO forces intervened in Syria.

The FARS report has not been confirmed by other sources. However, the nature of Assad's alleged threat mirrors similar remarks made by pro-regime figures to Syrian opposition sources, regarding the regime's likely course of action in the event of an attack on it by international forces.

Syria analysts have long noted the major difference between the situation in Syria and that in Libya. Whereas Gaddafi was isolated in the region, Assad possesses a network of dangerous allies across the Middle East, most importantly Iran and its client in Lebanon Hezbollah. If the remarks attributed to Assad are correct, they reflect the invocation of this network as a threat. This, in turn, may itself be confirmation of the beleaguered situation of the Assad regime.

Meanwhile, yesterday, a European-drafted United Nations Security Council resolution threatening sanctions against the Syrian regime failed to pass, after Russia and China used their veto to ensure its failure. The resolution was tabled because of the ongoing killing by the Syrian regime of peaceful protesters demanding reform.

More than 2,700 people have been killed in Syria since the uprising against the dictatorial rule of Assad began in mid-April. The vote in the UNSC was 9-2, with Russia and China opposed, and India, South Africa, Brazil and Lebanon abstaining.

Russia's UN Ambassador Vitaly Churkin said after the vote that his country opposed any 'ultimatum' to the regime in Damascus. French Ambassador Gerard Araud, however, said that no veto could give 'carte blanche' to the Syrian authorities.

US Ambassador to the United Nations Susan Rice, meanwhile, expressed US outrage at the use of the veto, and demanded 'tough and targeted sanctions' against Damascus.

On Syria's northern border, as relations continue to deteriorate between neighbours Turkey and Syria, the Turkish armed forces announced yesterday that it would conduct a weeklong series of military exercises in a province along the border. Some Middle East experts interpret the announcement as a warning to Damascus. 'Turkey is sending a signal to Syria,' Lale Kemal, a defence expert and Ankara bureau chief with the Turkish newspaper Taraf, told CNN.

More than 10,000 Syrian refugees have fled across the border to camps in Turkey in recent months, while hundreds of Syrian demonstrators suffering from gunshot wounds have been treated at Turkish hospitals. On Tuesday, Turkey's prime minister stepped up his criticism of Assad. During a state visit to South Africa, Recep Tayyip Erdogan endorsed a Security Council resolution that would demand Syrian security forces immediately suspend their crackdown against anti-government protesters.

'We cannot remain a mere spectator to the developments in Syria,' Erdogan said. 'There are serious deaths against unjustly treated, oppressed and defenseless people. We cannot say "keep going" to this ... we have to fulfill our human task.'
Posted by Mike Moore at 02:36