From Antisemite to Zionist 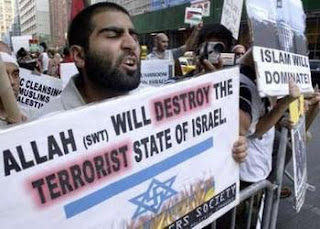 If I had it in my power, I would make it compulsory to have this article by Kasim Hafeez from this week's Jewish Chronicle printed on the front page of every newspaper in the UK.

In 2003, Pakistan's then President Pervez Musharaff sought to re-examine his country's relationship, or lack thereof, with Israel. He asked: 'Do we have to be more Palestinian than the Palestinians themselves?'

With their new 'Liberation' campaign, it seems that the Union Of Jewish Students has decided to answer that question with a resounding 'yes'.

Rather than being a brave move forwards for UJS, it is a hollow and cynical campaign that smacks of extreme cowardice.

The reality is that there is real anti-Israel and antisemitic feeling on British university campuses. How do I know this? Because until recently I was antisemitic and anti-Israel. Until recently, I was the one doing the hating. It wasn't the evil Zionist Israel that I had been told about.

Growing up in a Muslim community in the UK I was exposed to materials condemning Israel, painting Jews as usurpers and murderers. My views were reinforced when I attended Nakba Day rallies where speakers predicted Israel's demise.

My hate for Israel and for the Jews was fuelled by images of death and destruction, set to the backdrop of Arabic melodies about Jihad and speeches of Hizbollah leader Hasan Nasrallah or Osama Bin Laden.

There was also constant, casual antisemitism around me. My father would boast of how Adolf Hitler was a hero, his only failing being that he didn't kill enough Jews. Even the most moderate clerics I came across refused to condemn terrorism against Israel as unjustified.

In Waterstones one day I found myself in the Israel and Palestine section. To this day I don't know why I actually pulled it off the shelf, but I picked up a copy of Alan Dershowitz's The Case for Israel.

In my world view the Jews and the Americans controlled the media, so after a brief look at the back, I scoffed thinking 'vile Zionist propaganda'.

But I decided to buy it, eagerly awaiting the chance to deconstruct it so I could show why Israel had no case and claim my findings as a personal victory for the Palestinian cause.

As I read Dershowitz's systematic deconstruction of the lies I had been told, I felt a real crisis of conscience. I couldn't disprove his arguments or find facts to respond to them with. I didn't know what to believe. I'd blindly followed for so long, yet here I was questioning whether I had been wrong?

I decided to visit Israel to find the truth. I was confronted by synagogues, mosques and churches, by Jews and Arabs living together, by minorities playing huge parts in all areas of Israeli life, from the military to the judiciary. It was shocking and eye-opening. This wasn't the evil Zionist Israel that I had been told about.

After much soul searching, I knew what I had once believed was wrong. I had to stand with Israel, with this tiny nation, free, democratic, making huge strides in medicine, research and development, yet the victim of the same lies and hatred that nearly consumed me.

As an outsider, I ask why so many in the Jewish community are closing their eyes to the constant stream of anti-Israel hated spewed out from all facets of British society.

And while pro-Palestinian organisations burn Israeli flags, urge boycotts of Israel and protest against appearances by Israeli politicians or artists, UJS's response is shameful. It is not the time for UJS or any other group to engage in hollow flag-waving to show their 'progressiveness'. Let Israel's democratic history speak for itself.

Instead of meekly trying to avoid coming across as too pro-Israeli or too Zionist, it is time to make the facts known, to defend Israel against delegitimisation. It is time to stem the tide of Israel bashing before it becomes even more mainstream and consumes even more people like me.

Kasim Hafeez is a British Muslim and the founder of the website theisraelcampaign.org
Posted by Mike Moore at 06:40