The tell-tale signs of abuse 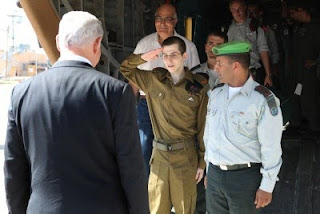 Yesterday, I drew attention to the thin, pale Gilad Shalit and the well-fed appearance of the freed terrorists.

BICOM today draws attention to the physical state of Gilad:

There were some concerns regarding the state of health of Gilad Shalit, who appeared to be very gaunt - belying claims by his Hamas captors that he had been better treated than Palestinian prisoners in Israel while in captivity.

Obliged to give an interview to the Egyptian media before crossing the border into Israel (a move which has led to anger and criticism in Israel of the Egyptian authorities), Shalit appeared also to have difficulty answering questions. Israeli officials later said that he showed signs of malnutrition. According to reports, Shalit also has Vitamin D deficiency, caused by lack of exposure to sunlight.

In an impromptu press conference outside his Mitzpeh Hila home last night, Noam Shalit, father of Gilad, said that Gilad was also still suffering the effects of wounds sustained during his kidnap, which had been insufficiently treated, and also from the effects of being deprived of sunlight. Noam Shalit likened receiving Gilad from captivity to experiencing the birth of his son anew.

As I look at these pictures, I'm finding it hard not to describe Shalit's captors and all their sympathisers with an expletive that has not passed my lips in the forty-odd years since I became a Christian!
Posted by Mike Moore at 01:22